Russia blocks LinkedIn, here is a letter sent by the professional social network to its users

Linkedin in Russia has more than 6.000.000 users but these days Roskomnadzor, a Russian Federal Service for Supervision in the Sphere of Telecom, Information Technologies and Mass Communications has confirmed a recent statement: it ordered Russian providers to block a domain Linkedin.com, making it inaccessible on all devices in the Russian territory.

Why is Russia blocking Linkedin?

A Russian law (fairly recent, having been enacted in 2014) states, that the data of Russian citizens should be treated on servers physically located in Russian territory. LinkedIn doesn’t respect it and continues to manage user data in Dublin in Ireland (the data controller for all concerned outside the US) on mainly Americans server.

In the same situation are other giants such as Facebook and Twitter, while Google and other 1500 international companies (according to the Russian government statements) have respected it.

LinkedIn has lodged an appeal but it was already rejected. Bianco Lavoro is now in touch with some of our contacts from Linkedin which have communicated us to be fairly concerned about the situation. LinkedIn is indeed one now fundamental business tool and its blockage will cut off millions of Russian professionals from international networking. Also, some large Russian companies, including an important bank, have already indicated that without LinkedIn will be in difficulty, both in recruiting and networking activities.

A fwe minutes ago one our Russian partner has forwarded us an email from LinkedIn (today November 18, 2016), here is the screenshot and english translation: 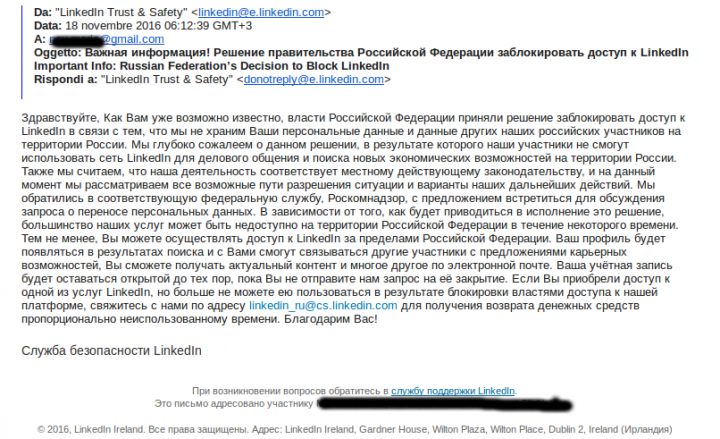 English Version:
Hello,
As you may have already learned, the government of the Russian Federation decided to block LinkedIn in Russia because we do not store the personal data of Russian members on the territory of the Russian Federation.
We are disappointed with this decision, which interferes with professional networking and the pursuit of economic opportunity for many of our Russia-based members. Additionally, we believe we are in compliance with all applicable laws, and we are currently evaluating the decision and our options. We expressed to Roskomnadzor, the relevant government agency, our interest in meeting to discuss their localization request directly.
Depending on how this decision is implemented, many of our services may no longer be accessible within Russia for some time. However, you could still access LinkedIn from outside of Russia. You can also still be found and contacted by others for career opportunities, receive relevant content over email, and other benefits.Therefore, we will keep your account open unless you tell us to close it.
If you purchased a paid LinkedIn service and can no longer access that service because of the government block, please let us know via email at linkedin_ru@cs.linkedin.com and we will make a prorated refund available to you.
Thank you,
LinkedIn Trust & Safety

As is clear from the letter, LinkedIn still hopes to improve the situation, but feels that at any moment the site can become invisible in Russia and even offers reimbursement to premium customers.

And what happens next?

Update, few hours after the email from LinkedIn

LinkedIn has been blocked in Russia. This message appears when you write Www.linkedin.com in your browser:

Translation: Access to the requested resource is limited by a court decision or otherwise, established by the legislation of the Russian Federation